Cloak Yourself in Anonymity With Your Own VPN Server 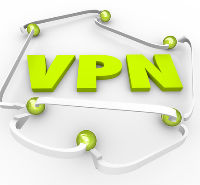 You know who you are. You are the type of person that brews your own beer—not just because you can do it better than the so-called professionals, but because you don’t want them meddling in your private affairs. You prefer to do things your own way. This approach is as true for your internet security as it is for your barley and hops. With a VPN (virtual private network), you have full control over how your server connects to another network over the internet. And just like with beer, you can buy commercial VPN software or you can make your own VPN server.

A VPN provides a number of benefits over a typical Internet connection or Wi-Fi. While traveling you can access all of your business network’s resources or your home network’s files—just as if you were in the office or on your couch. You can hide your browsing activity from your ISP (Internet service provider) so they can’t monitor your traffic. If you are a streamer or a gamer, a VPN lets you download files faster than your ISP allows. But, most of all, a VPN provides anonymity. With a VPN, you are cloaked to the rest of the Web.

As mentioned above, you can get a commercial VPN—they’re not too costly. However, you can’t reach the same levels of anonymity as you can when you put a VPN on your hosting account. Plus, it isn’t too difficult to learn how to make a VPN server and it’s not that expensive, either. All you need to get started is a basic VPS (virtual private server) hosting plan and a pint of that home-brew determination.

Not only does a hosted VPN give you the same benefits of a commercial option, you enjoy a few added perks, as well. Hosted VPNs do not share server resources like their commercial counterparts, giving you faster speeds and better performance. You get improved privacy so you can feel safe that your commercial VPN isn’t spying on you (now, that’s anonymous!). And you’ll have a dedicated IP address to avoid being blocked by third-party applications that require you to divulge your location (such as video streaming services and professional sports networks).

Once you have your VPS plan, it is time to learn how to install your VPN server. Because your server configuration can vary depending on your operating system (Windows or Linux on the LAMP stack), there is not one universal installation guide. However, you’ll have no trouble finding a tutorial on the Web. After you install the VPN onto your server, you then set up the software and connect the client (your laptop, smartphone, tablet, or other Internet-connected device) to your new virtual private network. Once connected, you can then configure both for optimum performance. At that point, pour yourself a cold one from your fridge. You’ve earned it. Plus, no one’s looking now that you have a VPN.

Eager to learn more about virtual private networks, VPS servers, and other hosting solutions? Check out our informative hosting guide.